How does the Russia-Ukraine war affect the shipping industry? 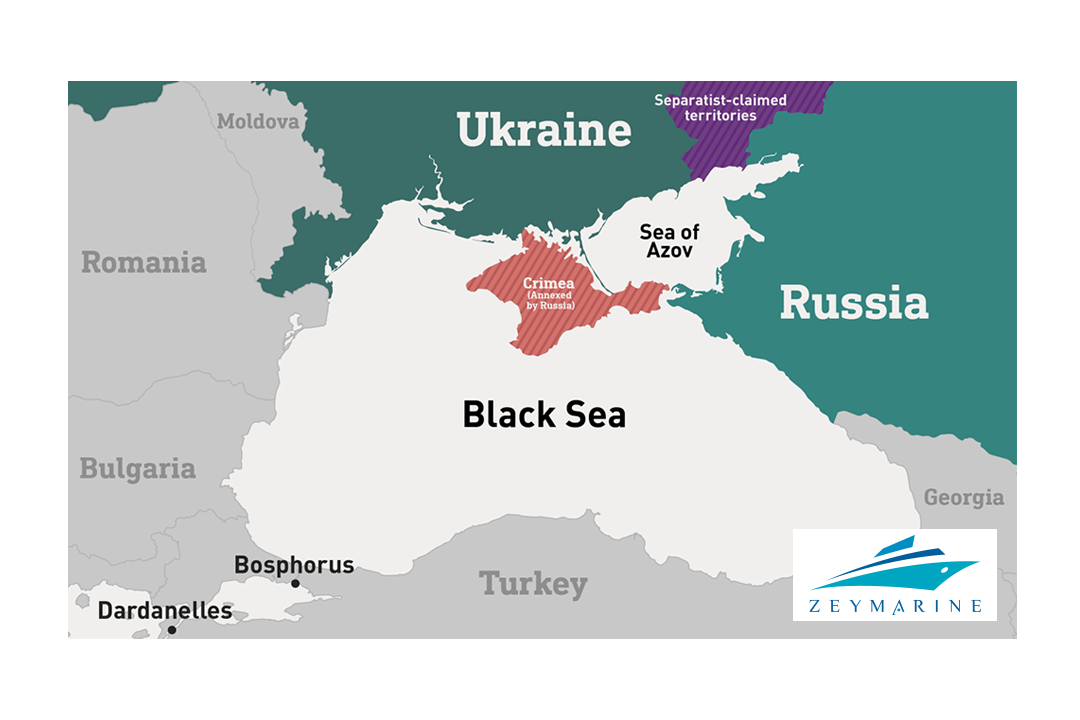 The ongoing war between Russia and Ukraine is getting more and more grisly each passing day. Inevitably, there will be remarkable alterations in the shipping industry too. Let’s take a look at the situation on our blog.

The Black Sea, in the heart of the infight, is a pivotal transition point for agricultural and oil-related products. Besides, both countries together hold more than a quarter of the global trade in wheat and about a fifth of corn. Needless to say, the accretion of the conflict could result in a serious nourishment supply crisis. Although some Russian Black Sea ports remain open, all the Ukraine’s ports are already closed. There are even some ships that are hit by bombs in the region. The future of the trade is worrisome. Higher costs, fewer capacity and delay expectations, according to experts.

Russia encounters a wide range of economic sanctions. So far sanctions have been aimed at different areas. The UK banned all Russian ships from entering British ports. In the interim, some other Western European countries like Germany, Belgium and the Netherlands could apply similar detentions. If shipping companies are targeted sanctions, freezing of bank accounts, assets, financial penalties and the halt or detention of cargo and its ship can occur.

One of the world’s enormous shipping container firms Maersk explained their preoccupations from their website. In their statement, they declared, ‘Our preparations include a possible suspension of Maersk bookings to and from Russia on ocean and inland.’ Maersk has been active in Russia since 1992.

According to a customer advisory from Maersk, entire goods passing to or from Russia are audited by the European customs authorities. The result makes the delays even more unendurable.

The operational problems are also fraught. The global labor crunch in shipping is still an obstacle. In consequence of the pandemic, quarantine requirements, vaccination issues, strict controls on borders and travel restrictions stirred up the labor crunch. However, due to approximately 15% of the world’s seafarers being either Russian or Ukrainian, even worse crunches are expected. Because of the western sanctions, it is hard to appoint how to pay seafarers from both countries. In the meantime, the majority of Ukrainian seafarers possibly return to their homeland to draft into the military. Currently, there is a general military mobilization across Ukraine ordered by president Volodymyr Zelensky.

Gleen Koepke, the general manager of consultancy firm FourKites said that the shipping rates could rise threefold in his New York Times interview. Shipping rates were an all-time high since the pandemic started. When considered from this point of view, economic fluctuations seem inextricable. Crude supply uncertainties are at the highest level. Nearly 11.3% of global crude oil trade and 9.7% of global refined products trade accounts for Russia.

On the other hand, the dry bulk market has returned to a favorable position after the start of the conflict. Spot rates and forward freight agreements concluded as supply-demand fundamentals are back in focus. Russia and Ukraine’s impact on the dry bulk sector is relatively small.

Spot LNG shipping rates are starting to pick up after an undynamic year during stagnant Asian LNG demand. Rising US-European LNG trade looks advantageous. Prudentially, due to possible ingoing and residual sanctions on Russian ships and elusiveness on geopolitical issues, the uptrend on the LNG shipping rates to continue in the short term is expected. 2.5% of the global LNG fleet is owned by Russian firms.

LPG charter rates are expected to ascent. The possibility of substituting LPG cargo from the US on the front burner is brought to the agenda. Higher crude prices were the sharpest result of the conflict, LPG and bunker prices will be impacted by it. If the current situation stays like this, bringing down freight rates in the long term is expected. When everything is considered, LNG and LPG shipping become prominent for the investors during these uncertain times due to high utilization rates and lower leverage.

According to Vortexa analyst Ioannis Papadimitriou, if anything will benefit from sanctions on Russian diesel imports, it could solely be the product tankers. In the eyes of Papadimitriou, traders have to pay overcharged freight rates for vessels, besides costs would go high for buyers from Asia, US and Europe. ‘In essence, the only winner in such a turnout of events is…the shipping community’ he said.

Around 70% of the needs of Europe are imported from Russia yet in the current climate the cease of the flow from Russia to Europe is at issue. However, new resolutions are opinable with circuitous routes. Alter the course by adding South America on the track creates not only a respectably longer route but also more need for ships. If the forecast becomes reality, before heading back to Europe the ships will undertake a journey with multiple loadings and dischargings and then ballasting to the US Gulf. For Papadimitriou, it will result in shipowners raising employability and profitability.