Canals in the World that Make Life Easier 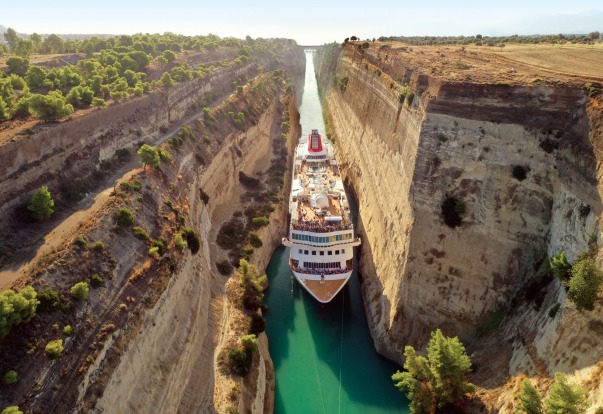 December 21, 2019 In Information By Zeymarine

Canals in the World that Make Life Easier

Shipping canals that offer shorter transportation routes are essential for the maritime industry. Even though there are hundreds of them, some of these canals stand out with their traffic capacity and fame. Let’s take a look at the 10 famous canals that make life easier.

Also known as just the White Sea Canal, this canal was constructed in 1933, by a forced labor of 126,000 people. The official records show that between 12,000 and 25,000 laborers died during the construction.

The length of the canal, that starts from the White Sea in the north and extends to the Baltic Sea down south, is 227 kilometers, of which 48 kilometers are man-made. Since the canal isn’t suitable for merchant ships vessels with larger dimensions, it witnesses only light traffic.

One of the most important canals in western Europe, The Danube–Black Sea Canal runs from Cernavoda, on the Danube river, to Constanta, and Navodari, on the Black Sea. Located in Romania, it is an important part of the European canal system between the North Sea and the Black Sea.

The main branch of the canal has a length of 64.4 kilometers and was completed in 1984. The north branch, also known as the Poarta Alba – Midia Navodari Canal, on the other hand, is 31.2 kilometers in length and was completed three years after the main branch.
The Danube-Black Sea has also historical importance as nearly 20,000 political prisoners worked on its excavation.

The Houston Ship Channel is located in Houston, Texas, the US. It serves as a passage for ocean-going vessels between Houston-area terminals and the Gulf of Mexico. The 80-kilometer long canal is essential especially for the US as it makes Texas one of the countries’ busiest seaports.

It is a widened and deepened natural watercourse created by dredging Buffalo Bayou and Galveston Bay. It has been used since at least 1836.
Even though it has great importance for the area, the canal causes some controversies too. In 2007, the University of Texas released a study suggesting that children living within 2 miles (3.2 km) of the canal were 56% more likely to become sick with leukemia than the national average.

The 98 km-long Kiel Canal, formerly know as Kaiser-Wilhelm Canal, connects the Baltic Sea with the North Sea since its opening in 1895. More than 9,000 workers completed the canal in eight years.
Starting from Brunsbüttel and ending in Kiel, it saves vessels from using a 460 kilometers longer and more unstable route passing from the Jutland peninsula of Denmark.
To be able to use this canal, the length of the ship must be 235.50 meters (772.6 ft) or less; and the maximum width (beam) is 32.50 meters (106.6 ft).

Located in Germany, the Rhine-Main-Danube Canal connects the Main and the Danube rivers, therefore connecting the North Sea and the Atlantic Ocean to the Black Sea. Even though there were many other plans of canals (some being successful) in the location, the canal that is present today was completed in 1992. It is 171 kilometers in length.
The canal has 16 locks. The maximum boat length is 190 meters. The Rhine-Main-Danube Canal is capable of accommodating barges with a capacity of up to 2,425 tons of bulk cargo.

The Volga-Don Canal connects the Russian rivers, Volga and Don, at their closest points. Together with these two famous rivers, the canal provides the most direct navigable connection between the Caspian Sea and the world’s oceans via the Sea of Azov and the Black Sea.

The Volga-Don Canal was opened and first used in 1952. The length of the canal is 101 kilometers. It features nine one-chamber canal locks on the Volga slope to raise ships and four locks on the Don slope to lower them.

The Corinth Canal connects the Gulf of Corinth and the Saronic Gulf in the Aegean Sea. Even though its length of 6.4 kilometers isn’t that impressive, it’s famous for being the deepest canal in the World, with a depth of 8 meters. Another importance of the canal is that it helps vessels sailing around the Pelopennese’s dangerous southern capes.
Corinth Canal is very old. The construction began in 1881 and the canal used for the first time in 1893. Although this ancient canal is not that capable to accommodate modern ships, it still serves around 15,000 ships from more than 50 countries.

Famous amongst everybody even if they don’t know much about maritime, the Panama Canal is one of the most crucial maritime gateways in the World. Opened in 1914, the canal connects the Pacific and the Atlantic Ocean through a narrow strip that separates the Caribbean Sea from the Pacific.
The 82-kilometer long canal shortens the journey of the vessels by 15,000 kilometers. Since the Pacific and Atlantic oceans are not at the same level, the Panama Canal uses Lock Gates on either side to lift the vessel to the higher level and similarly to drop down to the sea level. Used by 29 major liner services, the Panama Canal salutes almost 15,000 vessels every year.

The Suez Canal is not only as famous as the Panama Canal, but it’s also more essential. Opened in 1869, the Suez Canal connects the Mediterranean Sea and the Gulf of Suez. Therefore it provides the shortest maritime route between Europe, the Indian Ocean, and the Western Pacific Ocean.

Located in Egypt, this 193.3 kilometers-long canal is an artificial sea-level passage which is indispensable for the maritime world. It’s open at all times and heavily used by the shipping vessels from all countries.

The Beijing-Hangzhou Grand Canal is so long that it is mostly referred to as the Grand Canal only. Originally built in 468 BC, it’s the oldest canal in the world. Its length of 1,776 kilometers also makes it the longest canal of all This Chinese canal connects the country’s Hai River, Yellow River, Huai River, Yangzi River, and Qiantang River. In short, it connects the north and the south of China. When it reaches the mountains of Shandong, it also reaches a summit of 42 meters. This famous canal is not only essential for China’s economy, but it’s also registered as a UNESCO World Heritage Site.