Top 10 Most Impressive Bridges In The World 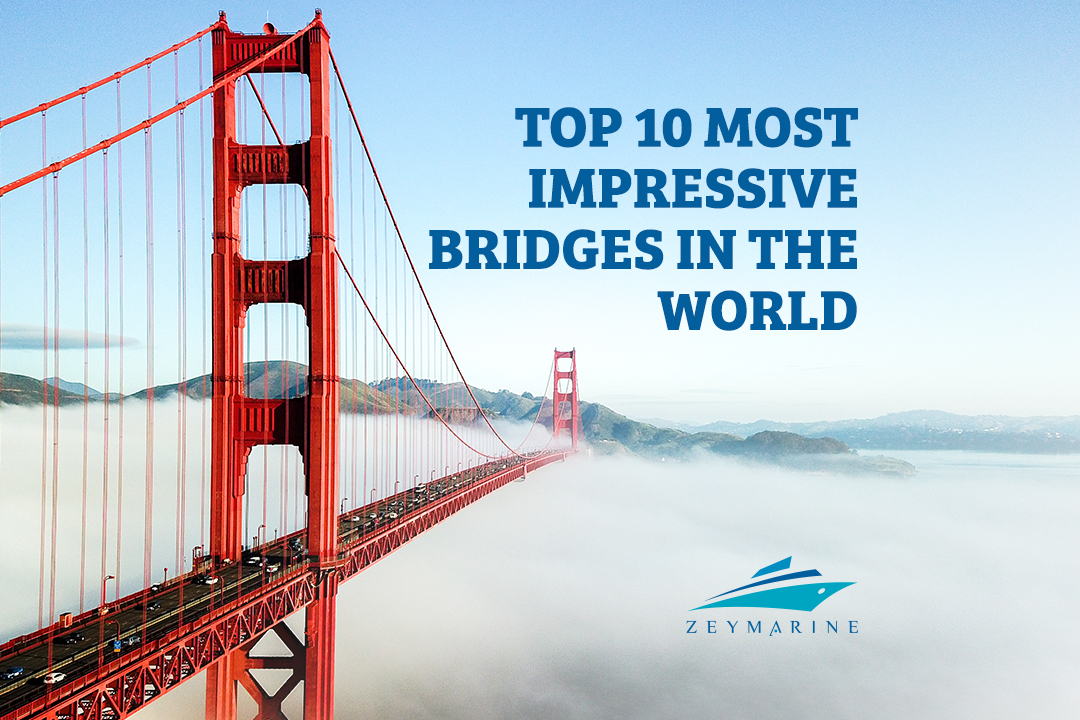 The bridges are not just the way of getting A to B. Something is intriguing about them. Here are the ten examples out of countless impressive bridges in the world.

Occasionally the history behind them or marvellous engineering brings them alive. For instance, sometimes when you cross the bridge you not only change your position but the continent you are in, as in Bosphorus Bridge. But let’s go deep into the other stimulating ones.

The city of Florence is irreducible yet to start somewhere: the heavenly mix of history, art, love and elegance. It is impossible to separate the importance of the Arno River and the beauty of Florence. Travers The Arno at its narrowest point, Ponte Vecchio (meaning ‘Old Bridge’ in Italian) is remarkable thanks to its picturesque frame. Rebuilt after a devastating submersion in 1345 and survived the Second World War, Ponte Vecchio now play host to umteen jewellery shops and attracts tourists. With only 32 meters in width and a maximum of 30 meters of span, it is rather small yet the impact on our eyes is inestimable.

When someone asks us to think about a bridge, we mainly visualize either closed to traffic or car-filled ones. However, structures which carry navigable waterway canals between water areas, called navigable aqueducts are widespread mainly in Western Europe. One of the most intriguing examples of them is Magdeburg Water Bridge, a small wonder because it is the longest water bridge in the world. 918 meters long length still impressive but along with a water depth of 4.25 metres, it also enable big vessels to pass over. The construction design is planned due to the problems associated with Elbe’s path which is either of the abutment. Because the path is quite lower, Elbe-Havel and the Mittelland Canals could not meet in the Magdeburg. Therefore the bridge was constructed in 2003 and ever since plays a fundamental role in transportation.

Crossing the continents by a bridge is not an uncommon thing for Turkey. Since 1973, it is possible to make a stride in the middle of Europe and Asia above Bosphorus. However, this time in the Dardanelles, a brand new bridge called the 1915 Çanakkale Bridge is rising. The bridge was named after the year of the inestimable Gallipoli campaign and opened on the day of Victory and Martyrs’ Day, March 18, in honour of the ending of the naval operations in the Dardanelles campaign.

The design has aimed to embody solidarity and strife that happened during wartime. Since the grand opening, it is the longest suspension bridge in the world with a main span of 2,023 meters with a reference to the centennial of the foundation of the republic. Corporal Seyit, a gunner in the Ottoman Army who famously carried overweight shells to an artillery piece on 18 March 1915, is honoured on the upper part of the tower by shell-shaped additions. Considered as an engineering masterpiece, it is completed 18 months ahead of schedule.

The discovery of DNA has ineradicably changed the way we comprehend the vivacious. It not only cater for information about health, security and numerous traits but also influenced the design of a bridge in Singapore by its shape. The Helix Bridge, located in the central city, provide pedestrians to cross between Marina Center and Marina Bay Area since 2010. With a length of nearly 300 meters, Helix Bridge offers its showiest moments at dusk. Ribbons of LED lights lighten the bridge by night. To represent cytosine, guanine, adenine, and thymine, the building blocks of DNA; c, g, a and t contains on the bridge. The structural curves of the tubes and the apologue behind the design create a mesmerizing atmosphere.

It is impossible to leave of Eiffel Tower when cogitating on France. No wonder, the exceptional scenery of Paris by the top of it is sublime enough to stimulate our senses yet, there is one structure in rural France that surpass its height of it. Millau Viaduct, a multi-span cable-stayed bridge having a height of 336.4 metres, has the titulary of the tallest bridge in the world as well as the highest bridge in Europe. Regarded as an engineering masterpiece and built in just three years, the bridge across the valley in the Aveyron department located in Southern France also has offer pastoral passage for drivers.

Acrophobia, the scientific name of fear of heights, is a common preoccupation among people. However, at more than 1400 meters above sea level, two giant heads (structure inserted under the bridge manufactured by wire mesh and fibreglass mixture supported by steel) reassure that you are safe at the Cau Vang which translates to ‘gold bridge’ in English. Designer Vu Viet Anh epitomizes his intentions to exhort the sentiments walking through the hands of God. Located in Bà Nà Hills resort, Cau Vang gives pedestrians the stunning beauty of the Annamese Mountains.

In the late 1880s, The City of London Corporation held a competition for the design of a new bridge to supply the rising need for the Londoners to cross the Thames without hampering the river traffic. It lasted about eight years to finally appease the authorities. In 1884, architect Sir Horace Jones and civil engineer Sir John Wolfe Barry came up with the idea and the rest is history. The Tower Bridge became the symbol of London. Bascules, the moving parts, is the key and most sophisticated feature of the bridge. Went up over 6000 times a year, bascules used to be powered by coal-burning steam engines but since the 1970s a combination of electricity and oil in the uses.

Transportation is predominantly functioning preemptible. In Prague, 18 bridges offer to cross the Vitava River, notwithstanding one delicate and enthralling choice stand out exceedingly: the Charles Bridge. Named after Karl the Fourth who gave the order to build, Charles Bridge, decorated by numerous arches and baroque-style statues as the most remarkable one is the one dedicated to John of Nepomuk. Counterintuitive, the builders did not add eggs to the grout to strengthen the mixture during the construction that take place in the 14th century. By tradition, just like other medieval bridges, Charles Bridge is protected by 3 bridge towers which give the bridge an even more ostentatious view. On foggy nights, the eloquentness, as well as fairness, culminates.

When sunset hit the arches and infest the caves, a few things could emulate the view of Khaju Bridge. Unorthodox to the occidentalism accustomed eyes, the bridge is nostalgic hindsight the times when Isfahan was one of the biggest and alluring cities in the world. Functions as both a bridge and a weir, it is also decorated with tilery and paintings. The perfect example for Persian architecture, still the bridge functions as a recreation centre just like the old days

Last but not least, the Golden Gate Bridge is contingently the most famous in the world. It is both an engineering humdinger and a cultural linchpin for the city of San Francisco. Could be noticed right away in consequence of its orange colour, it was both the longest and the tallest suspension bridge on the planet when it opened. Designed by engineer Joseph Strauss who is now honoured with a memorial agin the abutment of the bridge, the bridge connects the city of San Francisco to Marin County. Even though it is not on the list of the supreme bridges in terms of largeness, is undoubtedly the most visited bridge in the world. Recognized as a symbol for the power and progress of a nation, without a doubt the topnotch example of how a bridge has an impact and become the fundamental construction in the city.