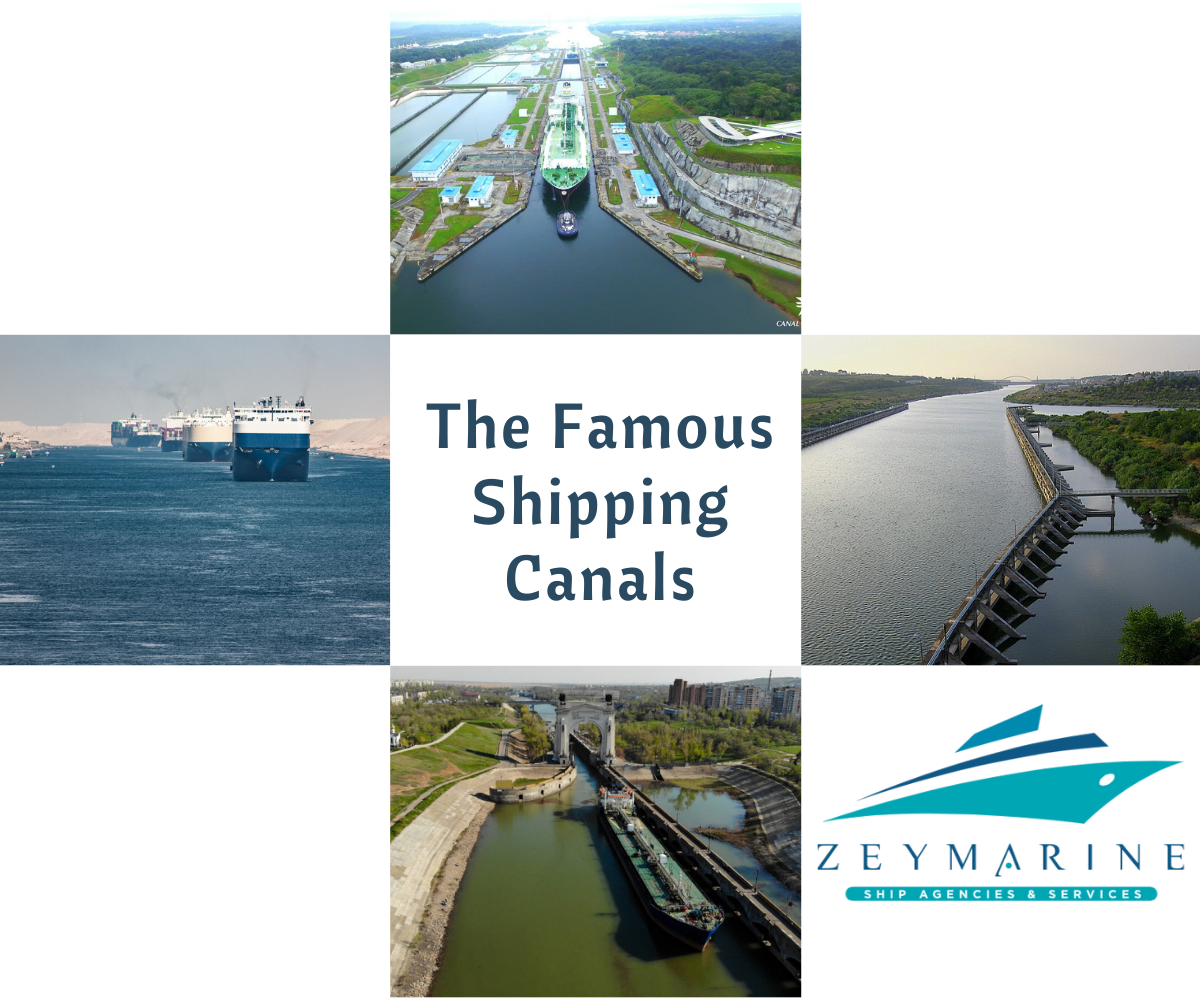 Let’s take a look at the most famous and busiest shipping canals from around the world;

Shipping channels are waterways built along major sea waterways to allow the passage of ships. Such channels provide short access routes between major seawater networks. And regulate maritime traffic within countries. Some of the shipping channels of different lengths, widths and depths around the world are also the world’s busiest traffic routes.

One of the most important sea passages in the western region, the Panama Canal connects the Atlantic and Pacific oceans. Work on the canal began in 1881. In 1904 the United States took over the project and opened the canal in 1914. In 1999 the canal taken over by the Panamanian government and is now managed by the Panama Canal Authority. The canal uses Lock Gates on both sides to raise the ship to higher and lower to sea level. It helps ships traveling between the east and west coasts of the USA shorten their journeys by 15,000 km. The 82 km (51 mi) long waterway serves 29 mainline services from the US East Coast to the Asian trade route.

The Beijing-Hangzhou Grand Canal is the longest and oldest canal in the world. It connects China’s Yellow River and Yangtze River. The canal passes through many provinces in the country and connects with many rivers. Connecting northern and southern China, the canal plays a major role in cargo transportation. Its contribution to the country’s economy is great. The Grand Canal, built in 468 BC, is a UNESCO World Heritage Site.

It connects the Red Sea to the Mediterranean. It reduces the travel of cargo ships from the Indian Ocean to the Atlantic by 7,000 km. The Suez Canal built between 1859 and 1869. It is a sea level channel. It enlarged in 2014 and a side channel opened in 2016. The northern point of the canal is Port Said in Egypt, and the southern entrance is Port Tevfik in the city of Suez. The Suez Canal is one of the most used maritime routes in the world and is the most important maritime channel.

It is an important waterway regulating inland traffic along Russian waterways from the White Sea in the north to the Baltic Sea in the south. Built in 1933, the shipping channel passes through the Arctic Ocean and Lake Onega. Since the 227 km long canals are not suitable for large-sized commercial vessels, the traffic is very low. It is one of the largest engineering and construction projects in Russia.

It connects three important rivers in the heart of Western Europe. Europa Canal, was first built in the 1938s. It is an important maritime transport gateway connecting the North Sea to the Black Sea via the Atlantic Ocean. It can accommodate barges with a bulk cargo capacity of up to 2,500 tons. It equipped with 16 locks, 11 of which located in the Rhine basin and the rest on the Danube.

The Volga-Don ship channel connects the Russian rivers Volga and Don. The original construction work on the canal at the nearest point of the rivers began in the 16th century. It is an important route connecting the maritime networks of Eastern Europe to the West. Opened in 1952, the 101 km long waterway passes through three reservoirs: Karpovka, Bereslavka and Varvarovka. The canal has nine single-chamber canal locks on the Volga slope for lifting ships and four locks on the Don slope for lowering ships.

Connecting the Baltic Sea to the North Sea, the Kiel Canal passes through the German state of Schleswig-Holstein. Opened in 1895, the 98 km long Kiel Canal helps ships bypass the longer route through Denmark. It saves an average of 250 nautical miles. The construction of the present Kiel water canal only began at the end of 1887. About 250 ships pass through the canal daily. It considered the busiest waterway in Europe. It runs along the hydraulic structure and shortens the road 700 km. It is also safer. So ships do not have to cross the (difficult part of the Jutland Peninsula).

It is a waterway between Houston, Texas and the Gulf of Mexico. Opened in 1914 and developed, the canal is one of the busiest ports in the United States. Developed by dredging works in Buffalo Bayou and Galveston Bay. The shipping channel was later widened and deepened to ensure its sustainability.

The Danube-Black Sea line is an important crossing in the Western European region. This shipping channel connects the Danube to the Black Sea. It connects the Black Sea to the North Sea via the Danube-Main-Rhine channel. It offers a sea passage to Eastern Europe via the Volga-Don. It allows ships to bypass the difficult delta region of the Danube. The main branch of the canal with a length of 64.4 km built between 1976-1984, and the northern branch with a length of 31.2 km built between 1983-1987. Tens of thousands of political prisoners employed to dig the waterway.