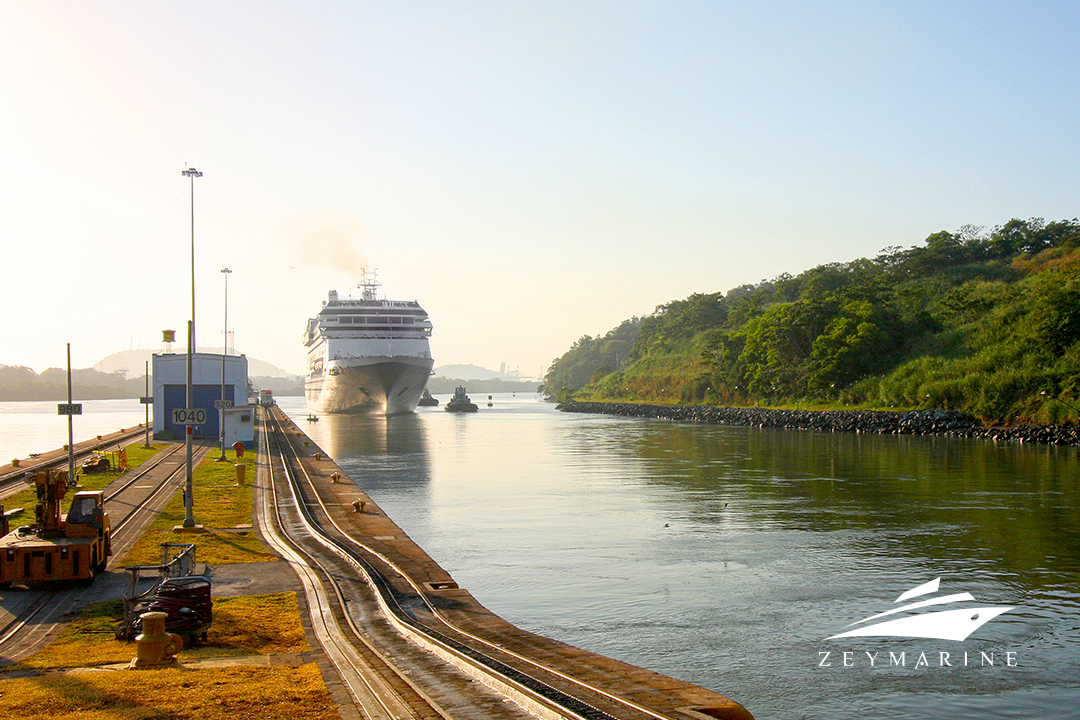 Since SS Ancon first crossed it in 1914, Panama Canal has been one of the foremost and busiest waterways in the world. Every day, around 40 ships cross between the Atlantic Ocean and the Pacific Ocean by the Panama Canal. However, because of the fact that the Pacific Ocean lies a little higher than the Atlantic Ocean, water locks take part in the process of transmission. Let’s learn how they work.

In the process of transiting vessels between the Atlantic and the Pacific Oceans, three sets of 12 locks play a part. It was two sets of locks before the expansion in 2016.

The starting point of the project was the 26 meters difference between the sea levels of the oceans.

Panamax ships have been built by the maximum requirements and the dimensions of the lock of the Panama Canal. The original locks are 33.53 meters wide and have a length of 320 meters. Also, they have thicknesses ranging from 15 meters at the base and 3 meters at the top. However, after the expansions, ships with an overall length of 366 meters, a beam of 49 meters and a draft of 15.2 meters can travel from the canal. Thus, it resulted in the new term called ‘Post Panamax’ to describe ships that can travel from the canal.

Gates only open when the water level is equal on both sides, their size ranging from 14.33 to 24.99 meters and measuring about two meters in thickness. Each of them includes two leaves in the shape of V gates to deal with the force of the water.

For passing to locks, 26,700,000 US gallons of water have to fill each chamber. The whole system operates electrically. To make sure the process was handled carefully and to help vessels to travel through the lock chambers, a control room was placed on the centre wall of the upper flight of locks.

The Transition of Vessels

Let’s imagine a vessel travelling from the US to Chile. After days spent on the Gulf of Mexico and the Caribbean Sea, the vessel ought to head to the Panama Canal.

The very first thing the vessels do after paying the tolls is to transit through Gatun Locks. In Gatun Locks the level of the ship raises about 26 meters, thereafter the vessel becomes ready to navigate for 34 kilometres until the Culebra Cut.

Approximately 8 to 10 hours later, the vessel finish her transit in the Panama Canal.,

The process of the vessels during the Panama locks follows:

1) The vessel approaches the lower chamber
2) In order to bring water level to sea level, initially the valve of the first chamber opens. Water leaks from the higher chamber to the lower by the force of gravity
3) The lock gates open for the entrance of the vessel. Immediately after the vessel arrives, the lock close
4) To increase the water level, the next chamber opens.
5) The gate of the lock opens and the vessel transit to the next chamber
6) The water levels again
7) Ultimately, the vessel moves off from the lock and enters the 77 km long canal.

This process repeats at the end of the canal with some minor differences.