Top 10 Historic Ships of All Time in Maritime World 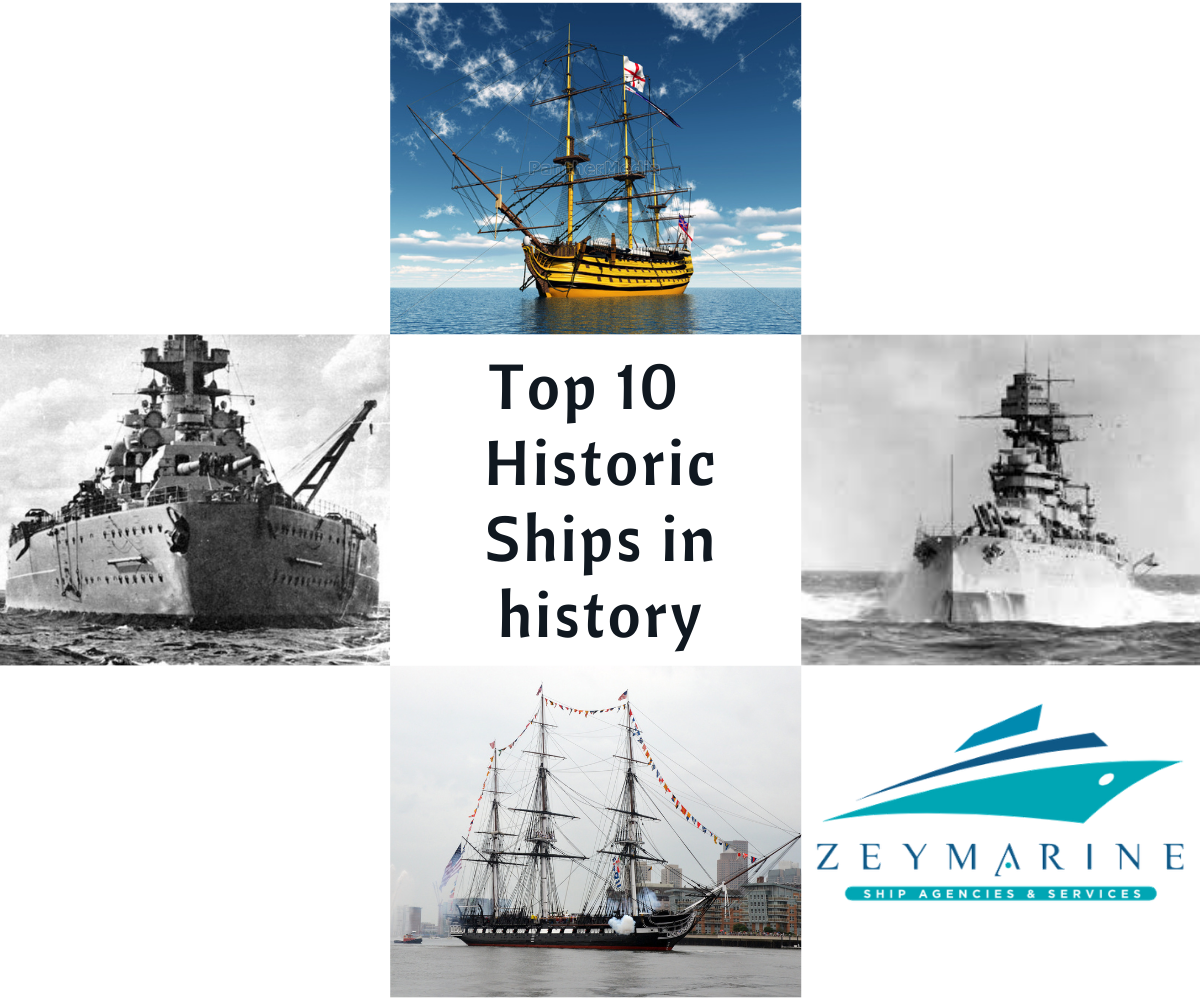 Ships have long been an important part of human history. In this article, we present 10 of the greatest, unique historical ships of all time.

In the past, shipping was the only method to transport goods and supplies around the world. During the war, ships were also an integral part of strategy and tactics.

In maritime history, every ship has a story that comes from its construction, route, people and experiences. They carry the mysteries of their age. It is the accumulation of maritime secrets and old world craftsmanship. But, some of these are not forgotten and stand out with their story. Here are the 10 most famous ships in history.

The fame of the 70-foot long, slow-moving Spanish Ship comes from Christopher Columbus’s exploration of a new world. On Christmas Day, 1492, the ship ran aground and was later used to build another famous ship called La Navidad. “You can never cross the ocean unless you have the courage to lose sight of the shore” Christopher Columbus

It is the cultural icon in the history of the United States. British Separatists and Puritans (Pilgrims) are moved from Plymouth to Massachusetts, the “New World”. This journey made the Mayflower a symbol of European colonization. The Mayflower crew spent the winter with the pilgrims living on the ship and returned to England on April 5, 1621.

Built in 1863, the ship was designed to sink Union Navy ships and block Southern ports. It sank twice during the testing process and 13 crew members died. On February 17, 1864, the Union sloop triggered and sank a spar torpedo aboard the Housatonic, making the Hunley the first submarine to bury a ship. It exists as a designed tank that has been waiting for protection since August 2000, after a 136-year wait at the bottom of Charleston Harbor.

To serve both the French and Spanish fleets in the last decade of the 18th century, it is considered one of the largest wooden warships ever built. He is best known for his role as Lord Nelson’s flagship in the Battle of Trafalgar on 21 October 1805. After the end of the Napoleonic War, she was restoreD by the British government in 1922 and now serves as a museum ship in Portsmouth, England.

It was one of the most armed ships in the US Navy and was the largest ship in the navy’s fleet. In 1941, USS Arizona destroyed by the Japanese in a surprise attack on Pearl Harbor. The attack killed 1,177 crew members, including the captain, and engulfed the ship in burning flames for days. The ship could not be saved, but remained a war memorial in Pearl Harbor.

This huge historic ship, 823 feet long and with a greatest speed of 30 knots, is a warship named after Chancellor Otto von Bismarck. It was the first of two Bismarck-class warships built for the Kriegsmarine of Nazi Germany. It is considered one of the largest warships built by Germany, completed by the Hitler Navy. In 1941 he suffered a major blow in the British Navy. The British warships sank to the bottom of the sea after causing enough damage to the fleet. How it sank has never been determined. In 1989, American oceanographer Robert Ballard located the Bismarck wreck.

It is the longest serving warship in history. Still standing for 213 years, the ship is known as the Old Ironsides and has been serving as a museum in Boston, Massachusetts since 1907. It has been restored, renovated and rebuilt many times over the years. The only remaining part of the original is the spine.

The longest serving warship in the US Navy was named by George Washington. Their main task was to protect American merchant ships against French fleets and to fight Berber pirates. He gained his greatest fame in 1812 when he managed to capture merchant ships during the war against England..

It entered the history of the ship as one of the most remembered not for its success stories, but because of the problems it caused. In 1898, while anchored in Havana, Cuba, a mysterious explosion split in two, killing most of her crew. To date, the cause of the explosion is unknown. It is suspected of an act of sabotage that led to war between the United States and Spain.

Later, in 1911, the remains of the ship removed from the port to clear the passage for sea navigation.

At the onset of the First World War, the United States remained dormant. But after the German Navy sank Lusitania off Ireland in 1915, more than a thousand people died. The United States then entered the First World War. The Lusitania was built for transatlantic passenger trade. He won the Blue Riband award by making the fastest Atlantic crossing with an average of about 24 knots.

The most famous ship to face the most tragic event in maritime history, When the large luxury Ship was built it thought to be unsinkable. Unfortunately, on his first trip from Southampton to New York in April 1912, he hit an iceberg, and as a result more than 1,500 people died. The ship’s wreck was discovered by Robert Ballard in 1985 and inspired one of the highest grossing films of all time.